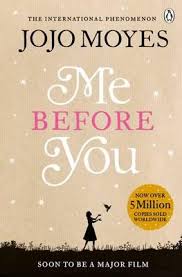 As a constant reader your heart will be broken frequently. If you’ve been reading the way that I have been; constantly since I was four years old, then you are attuned to the impending heartbreak of a novel, usually from the moment that you open the book.

So when I opened Me Before You and met Lou I knew without a doubt that I was going to have my heart broken… splintered into a thousand teeny tiny pieces and I craved that heartbreak. Because the only way that my heart wouldn’t become broken would have been if the writer took the easy way out and made this story into one of those cliched, dreaded happy ending novels. You know the ones: girl meets assholish boy, girl changes/accepts boys assholish ways, and they live happily ever after.

Jojo Moyes does not disappoint. She has written a thoroughly researched novel about heartbreak, pain, love, and the transformation that all of these things will cause in a human’s life.

I know, I know, I’ve waxed on poetically and I haven’t even told you what the book is about. Probably because, I couldn’t describe it adequately in my current blubbery state but Goodreads does an amazing job:

“Lou Clark knows lots of things. She knows how many footsteps there are between the bus stop and home. She knows she likes working in The Buttered Bun tea shop and she knows she might not love her boyfriend Patrick.

What Lou doesn’t know is she’s about to lose her job or that knowing what’s coming is what keeps her sane.

Will Traynor knows his motorcycle accident took away his desire to live. He knows everything feels very small and rather joyless now and he knows exactly how he’s going to put a stop to that.

What Will doesn’t know is that Lou is about to burst into his world in a riot of colour. And neither of them knows they’re going to change the other for all time. ”

And oh how they change. The journey that they take along their transformation is both annoying (because seriously Lou stop being so damned self involved. and Really Will you don’t have to be such an asshole all of the time) and amazing (when you realize that Will is the first person who’s ever really seen Lou your heart will stop) and I enjoyed every second of it.

You will see this book touted as a love story, it isn’t. It is in fact a social commentary on euthananasia, quality of life, and whether someone should be able to decide for themselves what they should or should not do about their life if they are unhappy with it. It is also an example of what happens when one becomes stuck in  a certain lifestyle out of necessity and what can happen when one’s status quo abruptly changes.

As a nurse I struggled with the euthanasia subject because I have met people who have zero quality of life and are absolutely miserable, who are kept alive because someone loves them enough to think that they should be kept alive by any means necessary. And I’ve stated to myself and my co-workers how selfish those people are. BUT usually those people are older or not cognitively there. To be forced to face my prejudices on this subject with a young person who is fully there cognitively was such a great lesson for me.

There are a few areas where the author used her creative license ie: Louisa being hired to be someone’s companion even though she has no experience, the issues that Lou and her family have (two adult children arguing over clothes and who gets the bigger bed) but to me those things added to the story. Also my mother’s fully grown children still climb into her bed and are selfish as hell so *shrugs* I won’t ding her for those as I have seen others do. Besides if Louisa would have been the appropriate choice for the job Will would have never let her get so close to him and the story wouldn’t have progressed so I’m glad that he was the reason behind her growth.

For the first time in a long time I have used all of my stars and rated Me Before You 5 Stars!! ALL 5 of EM!

If you’ve read it let me know if you loved it as much as I did in the comments. Especially if you’re a caretaker, nurse, or a person with disabilities. (I think she did a pretty good job of describing all of the BS people with disabilities go through but even though I’m a nurse I’m an AB so I’m not an authority on this. )

Oh and Spoiler ALERT! There is a movie adaptation coming out on June 3rd and it looks sooooo good. Check out the trailer here: Me Before You and remember to  #LiveBoldly

2 thoughts on “Me Before You: A Lesson in Heartbreak”