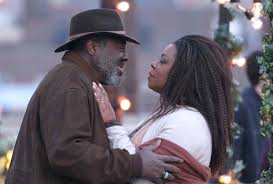 May 10, 2019May 10, 2019
My new favorite television show is The Village. I have a tendency to fall in love with stories about humans loving other humans in the midst of it all. And The Village has it all. (so far) *fingers crossed like a mug*
I’m on episode three and BABAY When Lorraine Touissant’s character tells her man how heavy it is to have to deal with Cancer and the heaviness that is the sadness and despair of the people who love you, I near bout fell out of my chair.
It’s a conversation that I have with Sheree L. Greer frequently acted out on the screen in such a way that I never imagined was possible.
I’ve been waiting forever for someone to acknowledge this. To talk about what it’s like to be sick or fighting for your life and to also be burdened with the feelings and emotions of all of those around you in addition to every other horrifying thing you’re going through.
“It’s more work for me Ron, being in charge of your pain and mine I don’t have it in me.” Has got to be the best line on a television show this year. At least for me whose Mama and Mama’s Mama are both fighting cancers.
“You’re an organ in my body woman. You fail. I fail.” has me on the floor rolling around with something in betwixt glee and heartache.
It’s like… Grey’s Anatomy… That feeling that I had when I fell in love with it all those years ago and I’m so here for it.
Especially this love and those dance breaks.