I’ve just returned from a writer’s retreat with one of my favorite writers in the world. We  worked on our respective projects in a townhouse in Orlando. 2.5 days of uninterruptedness focused solely on doing the work, on writing.

For me a part of writing is the unpacking of things. The novel that I’m currently working on is set in a fictionalized version of the town where my father is from in Southern NJ.

In the beginning of the story I’m nostalgic. I miss the Custard Ranch and Lake Nummy. I want to take my family there. At the Climax of the story I realize that I have all of these reasons why I never go to the family reunion, how I’m always too busy or “want to remember them how they were when they were alive” for funerals, and I realize that I haven’t really been back to my father’s town since the night that I was raped, in my aunt’s home, in my cousin’s bed. How that night pretty much changed everything. How my father’s reaction was the first time anyone broke my heart and how it taught me that no matter who says that they will always have my back, I can always only depend on me.

How after that night I haven’t spoken to my cousin since:
1: she didn’t believe me
2: she was naked in her bed so why did her man come and destroy me.

I realize that these thoughts too are rape culture.

I realize that that night in my father’s town was my introduction to rape culture and how it was the final lesson on why as a woman child I needed to learn to disappear.

I watch this election cycle and witness rape apologists question why Drump’s rape victim waited until she was an adult when the allegation happened when she was thirteen and I want to yell at them that the reason she waited all of this time doesn’t matter. Hell I told and not much happened to him. A person can have cuts and bruises on her vagina and people will still figure out a way to make the incident that person’s fault.

See the Stanford Victim.
See the women in the Holtzclaw case.
Witness the questions.

What were you wearing?
What were you drinking?
Did you laugh with him?
Like Nate Parker’s victim had the two of you been intimate in the past?
Why were you at the party, the club, his house, your aunt’s house.
Why were you doing whatever you were doing that made it possible for him/her/them to do what they did?

The burden of the proof for alleged rape is on the complainant and anything that they say or do or don’t do or wear will be used against them in a court of law.

Anything that they say or do or don’t do will be judged on the internet by a jury of the world. Their name and address may be leaked on Fox News.

After that night It would be many years before I would wear a bikini. I never drank in excess, especially if I wasn’t around a shit ton of people who could protect me. I didn’t experiment with drugs. Always walked to my car with one key sticking out of my fist. Took self defense classes. I was leary of all men and most women. I wouldn’t dress provocatively for many years- remember when I was in that jeans and t-shirt phase for a long ass time? That and so many things came out of that night.

A night when I went to sleep a teenager wearing a long nightgown and awoke to someone already inside of me. A temptress with perky breasts and no panties on. A night that taught me that the police don’t have the rape victim’s back in the ways portrayed on Law and Order. A night that would eventually lead to the first heartbreak of my life when my father didn’t believe me. Where I lost one of my best friends. Isn’t that a Facebook meme? How a cousin is your first best friend?

Writing is supposed to be cathartic but I didn’t enter the writing of this story hoping to get any relief from the events of my past. I’m a Landmark Grad. I’m over that. Or so I thought.  I went in to the writing of this story hoping to write a story about a girl who gets raped and portray the way the adults act in a manner that shows adults how they should respond to girls who are victimized in their lives.

I hoped to raise awareness.

I hoped to show other girls that they aren’t alone. To inspire them to tell someone. If that person doesn’t respond appropriately, to tell someone else. (I find that teachers are great people to tell. They will tell some shit and back you all the way up.)

I hoped so many things  that authors hope when they write novels centered on true events, mostly about lessons, and I still do. But now, I also hope to get the courage to go to my father’s hometown. To take my family to buy chicken tenders and french fries from the Custard Ranch with honey mustard. To convince AB to swim in the lake even though it is not the clear blue water that she prefers to swim in. To introduce DJ to cousins whose entire adult lives I’ve missed. To take back the power from my rapist. Because he did rape me. And  I did wake up with him already on top of me. Already inside of me. And I deserve to get back every single thing that he took on that day.

When I was five I wanted to be a Ballerina, and a Princess, and I wanted to learn to swim so that I could be an oceanographer and swim with the dolphins.

And when I was ten I wanted to be a fashion model, and a dermatologist so I could fix my brother’s skin, and to be the most beautiful bride ever.

At 17 I only wanted to be able to go with my friends to the movies and not be able to relate to the woman on the screen who had just gotten violated and was no longer whole.

I didn’t wanna be a tragedy.

And I am a Princess.
And
In the very near future when I marry my GIRLfriend in her eyes I WILL be the prettiest bride ever.
I am funny and I am smart and I am loved and I am accomplished but no matter how much I accomplish I will never be WHOLE.

I wasn’t going to share this poem today but every time I see a picture of Bill Cosby circulating I think of all the women who wanted to be an actress, then wanted to act opposite Bill Cosby, and then wanted to not have been violated by Bill Cosby… and I think how fucking awful it must be to have to have gone through something as traumatic as this then to have millions of people chiming in throwing in reasons why this just DID not happen to them. Or stating that if it did it’s only being used now as some sort of conspiracy to bring down an icon.

No, I wasn’t there but I vowed at a very early age to believe the victim because I personally know how many people don’t believe the victim and how that makes you feel. How it feels when the police ask you the same questions over and over again because how could he possibly know what tv show you were watching and why would he leave his naked wife for a child. I remember the times I pondered being dead over having to look at my father in the face knowing that he believed that I was just a fast tailed little girl instead of someone who went to sleep and woke up with a man who was supposed to be on top of his naked adult wife, already on top of and inside of her.

Rapists, molesters, predators, and abusers come in all shapes and sizes. Many of them are married and in high profile positions. They are your teachers, your police officers, your pastors, your dentists, and some of them are even your favorite jello pudding pushers.

The attack on women’s rights has been increasing instead of decreasing as the years pass. You would think that the more educated we become as a society the more we would understand that what a woman or any person does with their own body should be up to that person. Birth control, abortion, sex changes, and who we screw should totally be up to us. Increasingly it is not.

Women’s Rights has been a target of ridicule for many years now. Dating back to the 1800’s women were treated as mere posessions to be controlled by their posessors. From birth, they were the property of their fathers, until which time that they were purchased for marriage by their suitors. Once the transaction was completed they indefinitely became the property of their lawful husbands, at least until death did they depart. There was no place in society for women, much less for them to have right. Lately i’m feeling like we’re in 1814 instead of 2014.

Having an abortion or not having an abortion is a hard enough choice. Most women who make this decision do not enter in to it lightly and to have the options decreased or to deny access to safe abortions is preposterous especially since proponents of abortion are also the same people voting to decrease fair housing assistance, welfare, daycare assistance, and equal pay.  It was not too long ago when women were dying in back alleys from going to illegal, unsanitary places to have abortions. To do all of these things at the same time doesn’t even make logical sense.  “No you can’t have an abortion but if you can’t afford to take care of the child that’s your own problem.” *confused face*

Even if all of these things were available freely women should be able to make decisions for their own bodies. No matter the reason. Being raped does not trump being in college, being poor, being too busy, or just not wanting children as a reason to not have a child. Also it is not our business if someone uses state funded programs to pay for an abortion. Please don’t justify your nosiness with this excuse.

No one deserves to be forced to explain the reasons behind doing something that directly effects them and their body. It is their body and being that they own it they should be respected to do what they want with it. In the words of some fabulous black lady on the internet if I wanted the government in my womb I would fuck a senator. Actually I’d do Michelle but whatever floats your boat and all that jazz. 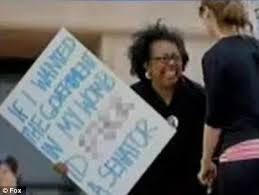