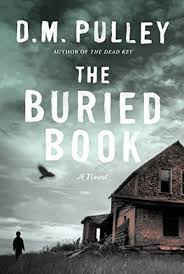 I haven’t thrown a book in the corner for quite a while but The Buried Book by D.M. Pulley is going straight into the corner. I would also like them to repay me my time and make my brain stop hurting.

The story isn’t bad per se… but the characters just got on my last nerve. Uhhhh I guess I should tell you what the story is about before I discuss characters so here goes:

Jasper’s mom Althea drops him off at her brother’s farm to live. She  leaves him there with nothing but a suitcase and a bible. She doesn’t give anyone a real reason for her abandoning Jasper. She’s apparently left him in the past but never for this many days so Jasper begins to worry. He overhears the adults talking about her and figures that she must be in trouble so  Jasper goes on a hunt for his mother putting himself in frequent danger. The entire story is one boringly outlandish incident after another as Jasper, a nine year old boy, hunts for his mother alone

While on this hunt Jasper finds her childhood journal which he uses for clues to where she may be. He finds himself on Indian Reservations, at bars, and strip clubs during his hunt. The story is outlandish and Jasper’s frequent crying and injuries just add to the outlandishness of the story. You set fire to the barn and burned a house down and didn’t get your ass whooped once from your terrifying christian farmer uncle?- I think not.

I struggle to give this story 2 stars but I managed to eek them out since I completed the book and cared enough about the characters to make it to the end. I do like D.M. Pulley so I’m going to consider this story a fluke…

EDIT: I lied up above where I said that I like D.M. Pulley. When I went to add this title to The Book Corner I see that the last book that I added to that list was The Dead Key by D.M. Pulley. My bad. I shall now avoid D.M. Pulley like I avoid people with unvaccinated children. *Kayne Shrug*